Well, I am in my last five weeks of school (y’all still praying?) and the class I am in is called Redemptive Cinema. Redemptive means the act of saving someone from error or evil. Okay! I am already looking side eye because the last two classes have been, shall I say, eventful. But I get in class last night and reading the syllabus, I am already over it. In walks our professor, for the night, who is filling in for our scheduled professor and he has plans for us to watch a movie and then critique it. Our choices were Blind Side, Invictus or 42; the majority chose Invictus. For those of you (like me) who have never seen it, the movie is about Apartheid in South Africa and Nelson Mandela. So, the movie starts and I am about 22% invested but as the movie plays, it grabs my full attention and I will tell you why. See, the people of South Africa had been experiencing apartheid (discrimination by race) for years. Mandela, freshly released from a 27 year prison stint becomes president. His focus (for the sake of the movie) is to reconcile the people of South Africa. 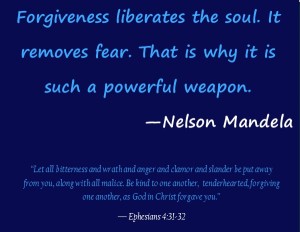 A hard task for a population of people who have been segregated by race however, Mandela tackles this task because while in prison, he studied his enemy – apartheid. And upon his election as president, he uses the one thing that was important to South Africa, their rugby team, The Springboks. His staff is already looking at him crazy because he has bought in white security guards, he is trusting of the whites and such but he tells them, “Forgiveness reaches the soul and it takes away fear.” See, Mandela said there was no time for petty revenge, it was time to build a nation. Why am I sharing this? Well, because there are too many of us fighting each other because of what the enemy did or is doing and it is causing us to lose focus on the bigger issue and that is, rebuilding a nation. For 27 years Mandela studied his enemy and he knew everything about him. Yes, the South Africans resented the colors the rugby team wore, because to them it represented apartheid (enemy) but in order to rebuild, they would have to take the very bricks that was once thrown at them, even if the colors once represented defeat. It wasn’t for pity but it was to bring unity by way of the very thing that caused division. Yes, some of you have been hurt by folk but it will be hurt that brings you back together. But it has to start with forgiving. The captain of the Springboks said, (you need to hear this), “Drink the tears of defeat, this time, but promise to never taste them again.” It is time to let go, you’ve got to forgive and rebuild. Stop looking at the ash pile, of what burned because you’ve got some rebuilding to do.