Each time I hear news of another woman being murdered by the hands of someone who claimed to have loved them, my heart drops. Every time a child has to watch their mom die, in front of them, my soul aches. With every death, there is a yoke being attached to those left behind. A yoke bonding pain to love.

In Acts 16:25-26, Bible says, “Around midnight Paul and Silas were praying and singing hymns to God, and the other prisoners were listening. Suddenly, there was a massive earthquake, and the prison was shaken to its foundations. All the doors immediately flew open, and the chains of every prisoner fell off!”

Last night, at midnight, I prayed. For those who asked for prayer request and those who didn’t. I prayed for families and our land. I prayed because God led me to do so. I prayed that doors of bondage would be opened and chains would fall off, immediately.

Some may ask, what is a good prayer to say at night? I say , anything that invokes God to listen. A simple prayer, the Lord’s Prayer or simply, God do it. Others may ask, what are the Biblical hours of prayer? Every hour of every day.

What is the significance of midnight? Midnight signifies the ending of one day and beginning of another. Biblically, midnight is considered the witching hour because it’s the darkest part of the night when evil is at its all time high. However, midnight is also significant because through your prayers, you can destroy what evil sets out to do.

No, I’m not saying you must pray at midnight. In fact, I only penned this devotional to share with you the prayer from last night, but I need you to know this … “Rejoice evermore. Pray without ceasing.” 1 Thessalonians 5:16-17 NLT

Maybe you feel unworthy to petition God’s throne because of the mistakes you’ve made. Maybe you feel too dirty to call out to Him. Maybe you haven’t prayed today because you just got out of your bed of sin. Maybe you’ve found it increasingly hard to utter words to God, because your mouth was just used to cut/tear someone down.

Allow me to help you today. God already knows, and He still loves you. Whatever it is, repent. Whatever it is, turn away and don’t return to it. Whatever it is, let it go and go before God. It is in Hebrews 4:12-16 that shares some hope for you to try again because God’s grace and mercy, towards us, never runs dry.

12For the word of God is alive and powerful. It is sharper than the sharpest two-edged sword, cutting between soul and spirit, between joint and marrow. It exposes our innermost thoughts and desires. 13Nothing in all creation is hidden from God. Everything is naked and exposed before his eyes, and he is the one to whom we are accountable. 14So then, since we have a great High Priest who has entered heaven, Jesus the Son of God, let us hold firmly to what we believe. 15This High Priest (Jesus) of ours understands our weaknesses, for he faced all of the same testings we do, yet he did not sin. 16So let us come boldly to the throne of our gracious God. There we will receive his mercy, and we will find grace to help us when we need it most.

Read verse 16 again because I need you to understand this … No matter what you’ve done or do, still go boldly (with a repentant heart) to the throne of God who is gracious, for there you’ll receive His mercy, and will find grace to help you when you need it most. Why? Because MERCY is when God doesn’t give us what we do deserve, and GRACE is when God gives us what we don’t deserve. 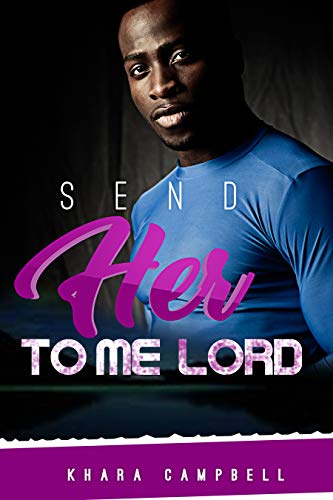 Send Her to Me Lord by Khara Campbell has been described as “amazing,” “wonderful,” and “great read.” Chrissy Dee says, “Ms. Khara, you did your thing on this book!”

And I couldn’t agree more.

In Send Her to Me Lord, thirty-six year-old Malik Day is given a hard and quick dose of reality and he soon realizes the need to evaluate his goals, priorities, and the people in his circle. When the relationship with the one he thought was forever ends, he decides it’s time he man up and get his life in order. One of the top things on his list is finding a godly wife. However, he learns, God doesn’t always bless us with the package we expect.

Click HERE for a FREE Sample then get your copy today. Available in eBook and Paperback by clicking HERE

Ay! Today and tomorrow ONLY … you can get the eBook versions of 2:32 AM, HERoine Addict and Surviving ME for FREE!

Yes, you read that right. FREE

Please note, for HERoine Addict and Surviving Me, it is only the eBook versions of these journals. If you desire the paperback that has pages for you to write in, you can purchase those separately.

You can get there here, by clicking https://authorlakishajohnson.com/journals/ or my Amazon Page https://www.amazon.com/Lakisha-Johnson/e/B0091JWVJY