The day after the Resurrection and some of you are being attacked, spiritually. It was probably somebody, at the family dinner, yesterday questioning you on “your belief.” You may even see some post on social media, downing what you believe in but whose report will you believe? In the bible, the day after some of the guards at Jesus’ tomb went running to the temple leaders to report to them what had happened. The bible says in Matthew 28:12-15, “A meeting with the elders was called, and they decided to give the soldiers a large bribe. They told the soldiers, “You must say, ‘Jesus’ disciples came during the night while we were sleeping, and they stole his body.’ If the governor hears about it, we’ll stand up for you so you won’t get in trouble.” So the guards accepted the bribe and said what they were told to say. Their story spread widely among the Jews, and they still tell it today.” They knew what happened because Jesus had already told them ahead of time, however, in order to discredit the faith of the believers in Jesus, they came up with a story to cover it up. Instead of owning up to the truth of being wrong, they bribed the guards to spread a false report. And you know what? It’s still happening today? Some of us are still being paid to tell the same false story. Yea, I know the churches are preaching “He got up,” in their good ole Baptist voice but do you know why Jesus had to die in the first place? Yes ma’am, yes sir; the resurrection is a good piece to make folk shout but the suffering, in the Garden of Gethsemane, is even greater to make folk save!

See, some of you are in covenant with folk who will try to convince you that all what you believe isn’t true. They will try to shame your faith, simply because it isn’t in line with theirs. They will try to cover up the fact that what you say contradicts theirs. They will have you sitting, near them, in order to hear what you’ll say and keep you close to ensure you don’t blow the cover off them. Some will brand it, ‘spiritual growth,’ when they know good and well there is nothing spiritual about it. They are bribing you to tell a story and you’re going along with it because the money and the fame is good. Well beloved, on this Monday, whose report will you believe? I mean, you’ve read the biblical report (I hope) and you know the tomb was empty, right? You do know that Jesus wasn’t there, don’t you? You also know that Resurrection Sunday has nothing to do with bunnies and eggs too; right? Then whose report will you believe? Listen, I am not knocking how you celebrate the Resurrection because I love me some boiled eggs and family dinner and I also enjoy the innocence of my nephew who wants to dress up in his suit and get his easter basket filled with candy and treats from my sister. However, I have a responsibility to teach him about Jesus and to let him know the real report. Stop accepting anything just to be in the presence of someone who has followers. Stop tell their story and tell Jesus’. There are reports out there but whose will you believe? I believe Jesus. Even when I have to suffer, I believe Jesus. Whose report will you believe? 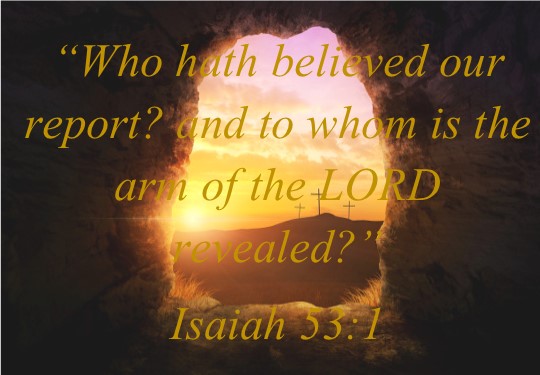