There have been times when I’ve been on the phone before stepping on the elevator and I inform the person, I’m on the phone with, the call may drop. I’ve even been in places where the person I’ve been talking too is experiencing bad service and I have to say, “You’re breaking up.” Baby! When God dropped this in my spirit on last night, I got excited about writing this devotional this morning. See, there will be times when you are being elevated that you may have to drop off some people. There may even be times when you’re on a different path and you have to stop listening to certain people by telling them, “I can’t hear you, you’re breaking up.” Chile, I’ve found that when you are walking the aligned path set by God, everybody can’t go. It’s not that they don’t want too but it’s because they just can’t. This is because everybody isn’t on the same level you’re on and sometimes they’ll start telling you stuff that will hinder you. They’ll even be afraid of what’s to come and make you turn back. “Girl, I wouldn’t go there if I were you.” “Man, that assignment looks scary, you sure you want to do it?” It’s not because they mean you harm but it’s because they’ve moved too quick to a level they can’t handle. 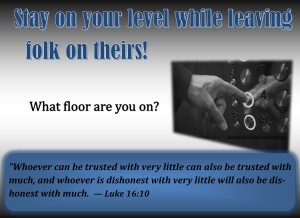 Don’t you understand that when you bring someone to a level that aren’t equipped for, it can seriously hurt them and you? Why do you think people who come into a lot of money blow through it so fast or why a lot of marriages fail? It’s because they weren’t ready to handle it. This is why you have to reevaluate your circle every once in a while to determine if the folk you’re trying to bring along for the ride can tolerate it. Why do you think everybody can’t do rollercoasters? Either they don’t meet the height requirement or they know their stomach can’t handle the twists and turns on the journey. Leave folk on their level! Why do you think some pastors don’t work out? It’s because they are good at ministry but not pastoral positions. This is why you can’t rush to get somewhere you know you aren’t ready to handle! I don’t care if everyone is saying you’ll preach one day, don’t rush into it until you are ready. Stay on your level! Don’t let someone push you into going back to school, drink two drinks when you know you can only handle one or act a fool with your spouse when you know it’s not your character. Stay on your level and leave folk on theirs! You aren’t in the elevation business, God is so let Him do it.