Even when you’re in a place of defeat, it doesn’t mean you’re out. It simply means you didn’t win, THIS TIME! So lift up your head my brother, my sister and stop holding it down in shame. Baby, if we won every battle what would we have to work for? If we did everything right, what would be the sense of trying? If we accomplished every goal, how would we appreciate the hard work and sacrifice? Beloved, if you just so happen to find yourself in a place of defeat, lift up your head! Smile the same way you would if you had won. Don’t take defeat as the last say so when you’ve already seen victories. It doesn’t matter what the doctors are saying; if you beat if before, you can do it again. It doesn’t matter the bank said no, if you’ve been approved before; it’ll happen again. So what if you got turned down for that promotion, you’ll get the chance again and the next time may be your yes. Ok, that relationship didn’t work; don’t count out this one. 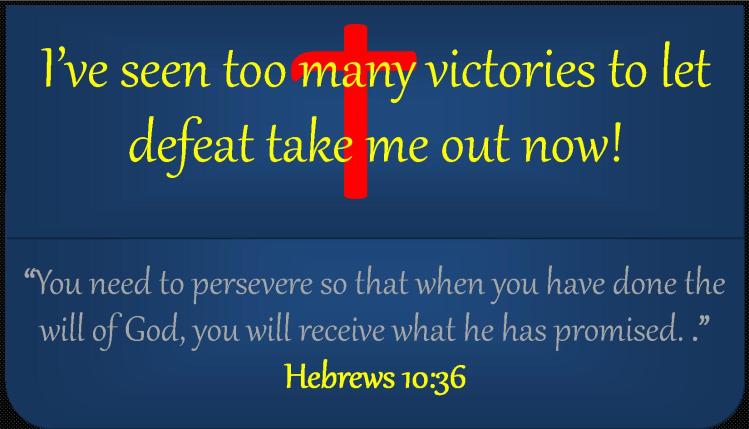 Hebrews 10:33-34 says this, “Sometimes you were exposed to public ridicule and were beaten, and sometimes you helped others who were suffering the same things. You suffered along with those who were thrown into jail, and when all you owned was taken from you, you accepted it with joy. You knew there were better things waiting for you that will last forever.” Yea, you may be subjected to being persecuted for what you believe in, beaten down by burdens or even people, thrown in a spiritual jail by the words of judgmental folk and lost all you had but take it with a smile and your head lifted up. Stop accepting defeat because your trust should be in a Man who can do anything BUT fail! God cannot fail. And when it feels like you can’t, turn in your bible to Hebrews 10:35-36 that says, “So do not throw away this confident trust in the Lord. Remember the great reward it brings you! Patient endurance is what you need now, so that you will continue to do God’s will. Then you will receive all that he has promised.” Be patient enough to endure your defeat for then you’ll be able to praise in your victories!