Disclaimer: I am not one of those overly spiritual type people who breaks apart the meaning in every message however, this time calls for it. This “sprinkle of Jesus” app says, “The worst weight a woman could gain is the weight of a weak man.” Well, what defines a weak man? I ask this because, now days, we tend to have our own definition of certain words. Weak isn’t a man who won’t work, that’s lazy. Weak isn’t a man who cries, that’s emotional. Weak isn’t a man who abuses a women, that’s a coward. Weak isn’t those who don’t take care of his family, that’s a boy. Weak isn’t a man who continuously cheat, that’s a cheater. Weak is defined as, lacking the power to perform physically demanding tasks and/or liable to break or give way under pressure. So, by definition, aren’t we all capable of being weak? You know, it is sad to me that a woman’s stipulation is “he must be strong” yet he is supposed to accept your weak self, flaws and all. What’s to say, you aren’t the strength he needs to get up and try again? Proverbs 31:25, “Strength and dignity are her clothing, And she smiles at the future.” How can you be sure, you aren’t the person God has made to help him out of the dark place? Proverbs 18:22, “He who finds a wife finds a good thing And obtains favor from the LORD.” 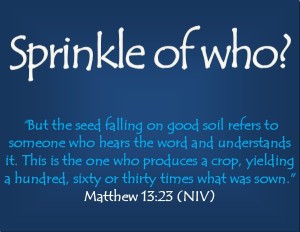 Please understand, I am not knocking the hustle of the person who owns/runs this app however, I do have an issue with what is being sprinkled on God’s children. Neither am I knocking what you are willing to accept but what I will share is this, don’t overlook a blessing simply because it doesn’t look like what you expected and just because it has the name Jesus on it, does not means it’s spiritual. (Jesus is also a Spanish name.) This is why you have to be careful what you are digesting. Yes ma’am, you have a right to not accept a man you deem as weak but don’t cry when a man won’t accept you for the same thing. The bible says in Psalm 82:3-4, “Defend the weak and the fatherless; uphold the cause of the poor and the oppressed. Rescue the weak and the needy; deliver them from the hand of the wicked.” Again, you have a choice and you can define weak as whatever you like but sprinkle of Jesus shouldn’t be your only biblical reference especially when the majority of it isn’t biblical. This is why you have to be mindful of what you allow to be sprinkled on your harvest. Would you sprinkle a powder on your crops simply because it looks safe or would you research/test it first? Would you sprinkle flour in your coffee simply because it is white or would you ensure what you’ve picked up is sugar? Beloved, just because it sprinkles doesn’t mean is safe, satisfying, sincere, sufficient and/or sanctified.