Yesterday, I told you about the issue we encountered trying to get our backup camera repaired. Well, the camera was fixed, that’s wasn’t the issue. The issue was the terminology the service adviser used when talking to the warranty people. He told them, the wires appeared to be cut, leading them to think the wires were deliberately cut thus them denying the claim. Understand something. The box to the camera is down under some stuff, enclosed by insulation and a harness (box); in other words, nobody can just walk up and cut the wires, it would have taken work. So, I call them because it’s clear, by the paperwork, the wires weren’t cut. The young lady said, the service adviser would need to call and explain this. I call the dealership and leave a message for Jeff and after 2 hours, he calls back. I tell him what the issue is and this man says, “I never said they were cut, I said broken/cut.” My reply, “Sir, the only reason they are denying this claim is due to your use of the word cut.” We converse for a few minutes, only hanging up with him saying he’d call and “explain to them again,” in a not really but I’ll say what I have to say tone. Needless to say, he didn’t call. However, my faith was already working. I called the warranty people, a third time and the gentleman says, email us the paperwork and I’ll have a supervisor look at it. A few hours later, Chris, the supervisor, calls back and says, “Mrs. Johnson, this paperwork clearly states your deck harness failed which caused the breakage of wires. I’ve already processed your claim and you’ll have a check in 7 to 10 days.” 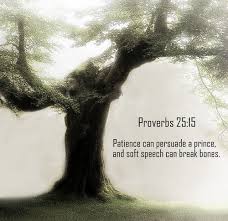 Usually, I would have been angry at the entire situation, starting with the initial call, especially after spending $500 for something we know should have been covered and even after the situation looked like it wouldn’t work out in our favor, on paper. But then I realized, it wasn’t me but it was him, the service advisor. I don’t know what his issue was, I’ve never met this man but it seemed like he was intentionally trying to wrong us. This is why I didn’t get angry or upset. I didn’t allow it to affect my mood. I paid the amount, got my keys then went and had dinner with my husband. Why? Because I knew, it was him and not us and whatever intent he had, it wouldn’t prosper. I am sharing this to let somebody know, you don’t have to fight folk, all the time. You don’t have to negatively respond, all the time because sometimes, the situation you find yourself in, is them and not you. And the way you respond, might just be your test. I told you yesterday, the right words matter and let me add, the right reaction manifests. For the bible tells me in Ecclesiastes 10:4, “If the ruler’s anger rises against you, don’t leave your place, for calmness puts great offenses to rest.” Don’t allow people to talk you out of who are you because bible shares in Stay who you are because the offense against you will not prosper.