Here it is, another day you’ve woken up feeling defeated. You laid down last night with the weight of the world on your shoulders because it seems like nothing you’re doing is working. You’re praying and fasting and still fighting and perishing. You’ve stopped doing the old things you used to do and still facing more hell. You’ve surrendered and still find suffering in your bed. You’ve been faithful and still fatigued. Devoted and still depressed. Helpful and still hated. Asking yourself and God, why can’t I win sometimes? Well beloved, I simply stopped by to tell you, it may be what you’re fighting with. See, I begin to write this devotional about cutting some stuff off but then the Holy Spirit sent me to Isaiah 2:4 which says, “He shall judge between the nations, and shall decide disputes for many peoples; and they shall beat their swords into plowshares, and their spears into pruning hooks; nation shall not lift up sword against nation, neither shall they learn war anymore.” Then He said, go to Joel 3:10 which says, “Hammer your plowshares into swords and your pruning hooks into spears. Train even your weaklings to be warriors.”

God is saying, you’ve been preparing for war when you should be preparing for harvest or you’ve been dressing for harvest when you should be getting suited up for war. And the reason you are not winning is because you are not able to decipher between the two which ultimately has you unprepared to be victorious. Plowshares are a tool used to turn over the dirt and pruning hooks remove dead stuff. A sword and spear is used for thrusting or striking. Look, there will be times when you will need to fight a battle but there are also times you will need to pluck up and cut off some things/people just to stop the damage to your harvest. However, the only way you’ll survive the battle or the cut off is being able to decipher the difference between when you have need of which. Because whether you agree with me or not, there are some things/people, in your vicinity who are not worth fighting over because they are harmful to your growth and this is the time you’ll need the plowshares and pruning hook in order to pluck them from their position and cut them off. Other times, there will be things/people, around you, who are worthy of fighting for because they bring out the best in you and this is when you’ll need the sword and spear to go to war on their behalf. Know when it’s time to fight and when it’s time to prune your space because it can make a difference. 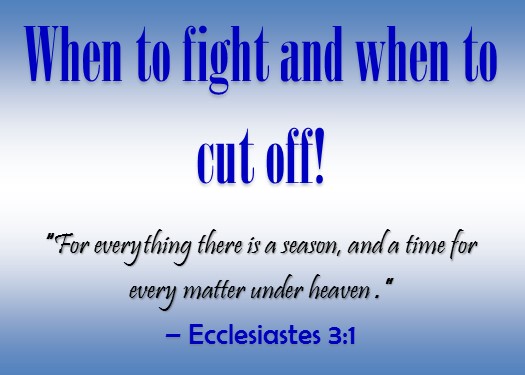