It’s been a couple of weeks since I’ve shared a devotional and this is because, I don’t share just anything. I wait for God to release a word and this morning, while I have so many things going through my head, God told me to stop and tell somebody … prepare for the storm. Yes, I know you don’t see the clouds but there’s a storm brewing. The sun is shining but the clouds are still forming. The weather is nice but a storm is on the way. What kind of storm? The storm of circumstance that’s going to attempt to cease your prayers. The storm of tragedy that will try to break your trust in man and God. The storm of weeping and suffering that’s trying to make you believe God has forsaken you. Beloved, prepare for the storm because here’s the reality, everybody with you in the sun, won’t be there in the storm. In fact, there’s someone already in your camp who’s waiting on the right time to betray you (hello Judas). Truth is, the one who is going to deny you, you invited them to your table (hello Peter). The one who will break a promise may be the one who vowed to love, honor and cherish you, forsaking all others until death do you part. What I’m saying is, if you aren’t prepared, the storm may just push you over the edge because it’s going to hurt like you wouldn’t believe and those you thought would be there won’t but you’ll survive, if you prepare for the storm.

Experts gives you a list of things to do in preparation for a hurricane or tropical storm. Experts say, know your evacuation route but God says, know you have a way out and be prepared to take it, even if it don’t make sense. Experts say, create a safety kit of water, nonperishable food, first aid kit and etc.. God says, trust Him enough to know, if He’s provided the way out then He’ll provide while you’re moving. Experts say, set up a safety room but God says, set up your prayer room and use it. Experts say, know where you are but God says know whose you are. Beloved, prepare for your storm. I don’t know when it’ll come but be prepared. I don’t know how harsh it’s going to be but be prepared. I will not lie, this storm is going to shake you to your core but I come today already decreeing that you shall not die! I don’t care what the enemy says, lay on your face in prayer and don’t forsake worship. Even when the storm starts to shake your dwelling, stand steadfast and know that you will come out and rebuild! I don’t care that it looks like the odds are against you, you will be victorious! It’s about to get crazy but it won’t last. The sound in your ears is about to be loud but keep praying. The shaking in your spirit is about to be something you’ve never experienced, brace for the impact! For the bible tells me in Revelation 2:10, “Do not fear what you are about to suffer. Behold, the devil is about to cast some of you into prison, so that you will be tested, and you will have tribulation for ten days. Be faithful until death, and I will give you the crown of life.” 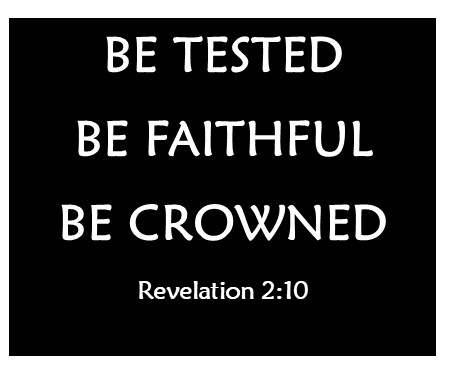