Skip to content
Pastor LaKisha Uncategorized October 1, 2013 6 Minutes
A Secret Worth Keeping by Lakisha Johnson
Shelby is a career woman turned housewife who enjoys the friendships that have been built with her 5 best friends; Camille, Lynesha, Raylin, Kerri and Chloe. They are all career women with different businesses or careers, husbands and even children but something is missing, something they can’t find at home, in a store or even in a book. So, they search for this missing piece in the beds, arms, cars, offices and even in storage rooms of other men who don’t mind paying for what Dem Dam Divas can offer. They enjoy the thrill of sneaking, creeping and even vacationing on someone else’s dime but what happens when it all becomes too much? From being found guilty with no evidence, secretly wanting someone who doesn’t want you, loving only to not be loved back, caught up in a dream that you’re about to be awaken from; will it be worth it in the end? Will their secret lives be revealed and will it become too much to handle? Will they regret their actions or stand by them? Will they finally question whether this secret is really worth keeping?
Excerpt:

“Good morning, Ray; Mr. Johnson is waiting to see you in his office.”

Thanks Ashley, I said. I knocked on the door that was already slightly open. “Hey, you wanted to see me?” He motioned for me to come in while he finished up a call. Once he hung up, he looked at me with the slight hint of an attitude and said, “Yea, since I didn’t hear from you this weekend!”

“Oh, do I detect an attitude? Seeing that I am not your wife, I don’t have to check in.”

He said, “You may not be my wife but I pay you like you are!”

“Yea, you pay because it’s worth every dollar and I do the things your wife doesn’t. Now, if you don’t want anything I have some work to do.”

He grabbed me by the arm before I could move and pushed me up against his desk. He pushed the intercom, “Yes, Mr. Johnson;” said Ashley.

“Ray and I will be busy for the next 30 minutes, no interruptions!” he barked.

He pushed up my pencil skirt and ran his fingers between my legs, surprised that I had no panties on as he hurriedly tried to undo his pants.

“Yea I know but remember we are at work and I don’t need you screaming like a girl!”

He laughed and said, “Then put something in my mouth to shut me up.” I, of course obliged.

I pulled my skirt the rest of the way up, pushed myself back on his desk and spread my legs wide enough for his head to nestle right in between them. I wanted him to get all the glory of my freshly shaved candy box and his tongue hit the bull’s eye on the first try and I was in Heaven. He parted my lips and sucked like he was trying to find how many licks until he got to the tootsie roll center!

“Oh my God!” is all I could say as I grabbed this man by the head. As I begin to have an orgasm out of this world, he stood and I took every inch of his long, thick cock as I wrapped my legs around his back. I put my hands on his ass and I pushed until I made sure I had it all.

“Dam girl!” he said as I laid back a little further to make sure he was feeling every bit of me. Oh, don’t get me wrong; I love this sex but I won’t let him see it. I grabbed his arms and rocked with him until we both came together.

“Baby, you will make a man sign over his company for that shit!”

“Yea, I know. Consider that a thank you for our trip this weekend,” I said as I walked out passed Ashley smiling before he even had a chance to respond. 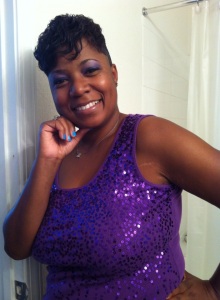 LaKisha Johnson is a girl after God’s own heart; doing what she believes to be her purpose..writing. In addition to being a self-publised author, she’s also a wife of 15 years, mother of 2 and native of Memphis, TN. She comes from a huge family and has always been the go to girl whenever someone needed a poem written or read, an acknowledgement that would convey just what they were thinking or even an occassion written for that special day. She’s an all-around talented lady that makes everything she touch turn to gold. She has 2 degrees from Southwest TN Community College both in Information Technology and has worked in the corporate field for over 15 years. She is also a dedicated blogger, delivering a devotional blog 5 days per week entitled “Kisha’s Daily Devotionals.”

LaKisha wants readers of her books to step outside the box and read with imagination. She wants them reeled in from the front cover to the last word, enjoying every second in between, asking for more. She doesn’t proclaim to be the best writer or even author in the world..she just proclaims to be blessed because her motto is “God’s purpose is bigger than any problem!”

Get to know Lakisha:

1. Who is Lakisha Johnson?

I am a 36 year old young lady, who is married with 2 children. I am the product of a large crazy family and I was born and raised in Memphis, TN. I am always on the go but I find time to write and read, which are 2 hobbies I love.

2. What made you want to become an author?

Writing or becoming an author isn’t something I set out to do but it is something that I’ve now found, I am destined to do. Writing is a passion and a gift that God has blessed me with and because of that it has become something greater than I could have ever imagined which is why I can now call myself an author.

3. Is this your first book and do you see yourself writing anymore?

No, this isn’t my first book but it is my first published book. My first book is a self-published book that is entitled, “Doses of Devotion” and it’s simply a book of encouragement. Yes, I do see myself writing many more books because this is only the beginning for me.

4. Why did you choose to write a fiction after a devotional?

It was actually a spur of the moment thing. I was sitting at home one night looking at some recent pictures from a sleepover with my sisters and aunt and this idea popped in my head. So, I grabbed my computer and began writing and it was fairly easy because I took some of the personality traits from my sisters, aunt and friends and the words just begin to flow.

5. Why did you choose the name, “A Secret Worth Keeping?”

I chose this title because everyone is always eager to hear a secret. I know it may be hard to believe but if you want to grab anyone’s attention; call, text or email them and tell them you have a secret to share and they will drop everything to hear it.

6. Is this book based on real life events?

No, everything that is in this book is my imagination. Now, don’t get me wrong, I am sure there are a lot of women who can relate, who have probably been in one of these situations or know someone who has but no, this isn’t based on real life.

7. What do you want your readers to get out of this book?

That a secret can bring complete chaos in any situation so choose your secrets or even the secrets you want to keep wisely because at any given time, they can blow up in your face.

Lakisha Johnson, native Memphian and author of over fifteen titles was born to write. She’ll tell you that “It isn't just writing, it's ministry." Along with being an author, she is an ordained minister, co-pastor, wife, mother and the product of a large family. She is an avid blogger at kishasdailydevotional.com and social media poster where she utilizes her gifts to encourage others to tap into their God given talents. She won’t claim to be the best at what she does nor does she have all the answers, she is simply grateful to be used by God. View all posts by Pastor LaKisha